The Innovation Prize for the Energy Storage Industry

for the Energy Storage Industry-

we unveil the winners of the ees AWARD 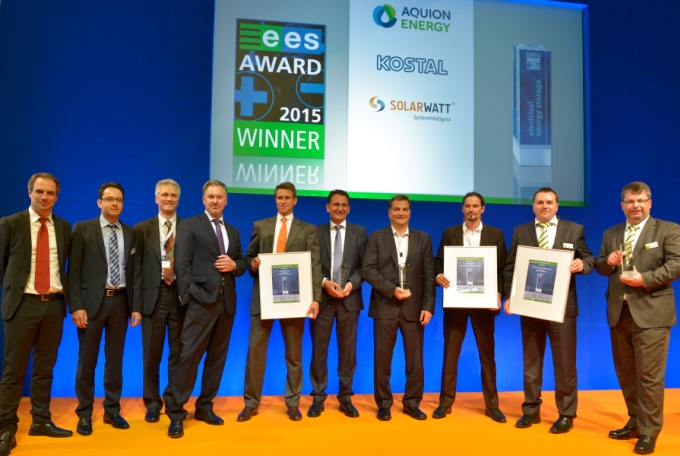 The three winners won over the panel with their pioneering solutions that boost the efficiency, profitability and functionality of energy storage systems. Aquion Energy, Inc., for example, pre-sented an alternative to lithium-ion batteries and lead-based cells with its durable hybrid-ion batteries, while KOSTAL Industrie Elektrik GmbH stood out with its complete system consisting of a DC-coupled high-voltage battery, intelligent inverter and current sensor. Finally, SOLARWATT GmbH demonstrated how a solar storage unit can interact with an inverter even without a communication device.

The panel examined the submissions' degree of technological innovation, benefits for the industry, environment and society, as well as economic viability and quality of innovation. Applicants entering the competition could only put forward storage technologies which were undergoing testing or were already in use (and that were being presented at Intersolar for the first time) or which showed significant developments in comparison to existing solutions at the time of submission. 2015 marks the second anniversary of the ees AWARD.

An overview of the ees AWARD winners:

Aquion Energy, Inc. (USA): The panel was impressed by the sustainability and reliability of the new generation of batteries presented by Aquion Energy, Inc. The Aqueous Hybrid Ion (AHI) batteries developed by the American company are suitable for stationary systems in domestic, off-grid and microgrid areas of application, and are almost exclusively made up of environmentally friendly components. A high level of safety is ensured by the use of an electrolyte based on an aqueous sodium sulfate solution. Since the cell temperature does not require monitoring, there is also no need to spend large amounts of money on fire protection and ventilation. What's more, the battery's storage capacity remains constant even during extreme fluctuations in temperature. Overall, the panel was convinced that the technology had "the potential to boost efficiency".

KOSTAL Industrie Elektrik GmbH (Germany): The PIKO BA System Li invented by KOSTAL Industrie Elektrik GmbH is a three-phase storage device for private households. It combines an inverter, a lithium battery pack and a current sensor that can determine the household's current energy demand in real time without the need for a separate battery inverter. Furthermore, the switch box protects the storage system from overvoltage. According to the panel, the durable lithium-ion battery stands out with its "versatility, reliability and modular design".

SOLARWATT GmbH (Germany): With its SOLARWATT MyReserve, the Dresden-based company has designed a modular battery storage system for home owners that is capable of being retrofitted. Featuring DC technology, the product is compatible with all conventional single-phase and three-phase inverters. It can be integrated without interfering with the solar array's output or communication system. In addition to its simple plug-and-play installation, MyReserve boasts an overall efficiency of 93%, enabling it to transform new and existing PV systems into particularly lucrative investments. The panel concluded: "The device won us over with its high level of energy efficiency as well as its remarkably safe design and ability to be integrated into existing systems.