The steel tubing industry continues its worldwide growth trajectory. After a sharp drop in 2009, overall industry output grew significantly for the third year in a row in 2012. The record for total 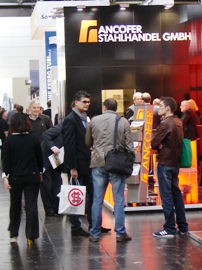 production was broken once again in 2012, with output climbing by 6% to 150 million tons, according to the German Steel Tube Association in Düsseldorf (www.wv-stahlrohre.de). However, this growth was limited to areas outside the EU. For example, production in China far outstripped the average and increased by 11% to 74 million tons. As a result, China now accounts for nearly half of total global steel tube production.

On the flipside, a production increase of just 2.3% to nearly 76 million tons remains for steel tube producers outside China. However, European steel tube manufacturers were not able to partake at all in this growth due to a depressed economic climate and weak demand, especially in Southern Europe. Production in the EU actually decreased from 14.1 to 13.8 million tons. The German steel tubing industry was also affected by this negative trend. Its 2012 output, according to the association, came in at 3.14 million tons, a decline of 3% compared to the prior year.

A year ago, the world seemed to be a much brighter place for the German steel tubing industry; after all, it had been able to post good results overall for 2011. Despite an increase in economic uncertainty over the course of the year, German steel tube manufacturers were able to augment production numbers of both seamless and welded tubes and pipes. According to the trade association, order intake figures even broke records occasionally during the first half of the year. Therefore, capacity utilisation was actually satisfactory in the industry as a whole, even though German manufacturers had to deal with once again decreasing order volumes in the second half of the year.

The energy sector has long provided critical momentum for both the international and the German steel tubing industry. A 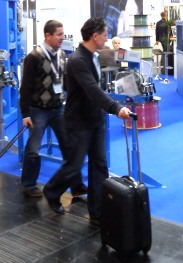 nd this area continues to be the largest market for steel tubes and pipes: Just over half of all tubes and pipes produced are destined for the transport of oil or gas. While seamless and welded steel tubes are used for the extraction and processing of oil and gas, the transport of liquids and gases relies mostly on welded pipes. The economic upswing, especially during the first half of 2011, led to an increase in the demand for oil and thus to record numbers of oil and gas drilling projects. The demand for OCTG (Oil Country Tubular Goods) mirrored this positive trend.

Other important key market sectors include automotive manufacturing, mechanical engineering, power plant construction, as well as the chemical, petrochemical and construction sectors. Accordingly, essential growth impulses for the German steel tubing industry in 2011 came from mechanical engineering, the automotive and chemical industry and the construction sector. The association reports that the wind energy sector is gaining in importance, specifically due to the demand for steel tubes used in the offshore foundations of wind power stations. In the area of energy tubes for power plant construction, stable demand abroad stood in contrast to weaker domestic business.

Even though there had been a number of production losses in the seamless and large-diameter tube segments, German steel tube production increased by 1.4% to 3.2 million tons in 2011. Germany lost the title as the largest steel tube producer in the EU to Italy because Italy was able to increase its output by 8% to 3.3 million tons in the same period. Nearly the entire German production - 3.0 million tons, 2.1% more than the year before - had been exported. Exports to countries outside the EU compensated at least partially for weakening demand, particularly from the southern European countries.

Imports to Germany increased by a significant 11.8%, to 2.2 million tons. Italy, which was able to increase its exports to Germany - as were France and Spain - was by far the largest supplier of steel tubes and pipes. Japan - supplier of large-diameter tubes for the Nord Stream project - and Switzerland, the Ukraine and Turkey also delivered more steel tubes to Germany than they had done in the year 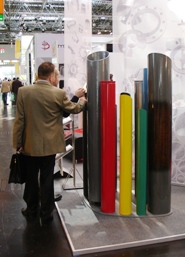 prior. By contrast, deliveries from the Czech Republic declined.

In times when growth happens mostly outside of Germany and Europe, a global presence is becoming more and more critical for German tube manufacturers, too. For instance, the tubes division of Salzgitter AG with its Europipe holdings has long been represented in the U.S. growth market through company-owned manufacturing sites there. In late October 2012, Benteler Steel/Tube GmbH from Paderborn announced the construction of its first U.S. manufacturing site in Shreveport in northwest Louisiana. The company hopes the building of a seamless, hot-rolling steel tube mill will strengthen its position beyond current sales activities in one of the most important growth markets for global oil and gas exploration. Says Matthias Jäger, CEO of Benteler Steel/Tube GmbH: "This is the perfect place to step up our OCTG market activities and to expand our presence in North America in order to allow for flexible and individual customer deliveries in the future." Production at the tube mill is scheduled to start in the second half of 2015. Plans for a second phase exist, the construction of a steel mill. The investment for both plants adds up to approximately 900 million dollars.

The economic environment, itself shaped by the sovereign debt crisis in several euro-zone states, determined the fate of German steel tube makers in 2012. While the year started in a promising way, the economic climate became increasingly challenging as the year went on. The economy cooled down - not just in Europe, but also in most regions outside of Europe. Besides the United States and Japan, this development also hit the larger emerging countries.

Salzgitter AG (www.salzgitter-de.com) reports that these trends led to declining turnover figures in the European steel market accompanied by high input material and energy costs and temporary capacity underutilisation in the tubes segment. A temporary gap in capacity utilization in the large-diameter pipes business and the desolate market environment of the French precision tubes company hampered the performance of the company's tubes division. At the same time, however, the sector benefited from the positive performance of the HFI-welded pipes and stainless steel tubes segments in the reporting period.

During the first nine months of 2012, Salzgitter AG was able to maintain total tube shipments at the prior-year level. In the tubes division, increased sales of medium-diameter line pipes compensated for the lower volume of large-diameter pipes. Sales expectations, particularly in the precision tubes business serving the automotive industry, deteriorated significantly during this period. By contrast, other product segments operated mostly at capacity until the end of the year.

As the company further reports, order intake and orders on hand in the large-diameter tubes section fell short of prior-year figures. However, order activity in the HFI-welded tubes segment was above average, especially in the first quarter of 2012, thanks to good international project and core business results. In the precision tubing sector, high demand from the German automotive sector was overshadowed by a much worse situation in western and southern Europe. Similarly, demand from industry and energy-sector customers remained rather subdued. The development in other sectors was equally inconsistent. While the upswing in the market for seamless stainless steel tubes continued, the project business fell short of expectations, especially in the power-plant development sector.

Salzgitter AG anticipates for its tubes division the possibility of temporary periods of capacity underutilisation over the course of 2013 due to the economic environment and the late-cyclical nature of the tubes business. This development might affect the large-diameter pipes segment, in particular.

The Steel Tube Association anticipates that global demand for oil and natural gas will continue to increase in coming years, which should lead to a corresponding rise in the demand for steel tubes and pipes. The extraction of so-called unconventional oil and gas reserves - meaning the highly controversial fracking procedure - is seen as particularly stimulating for steel tube demand. Infrastructure improvements in emerging countries, particularly in China, should also lead to further increases in steel tube demand.

According to the association, European manufacturers approach 2013 cautiously due to continued economic uncertainty. There is hope that government intervention will mitigate the burdens imposed by the financial and sovereign debt crisis in Europe and the U.S. in the medium term. Beyond that, inventory-cycle effects along with an increase in market confidence could favour an increase in steel tube demand in Europa as the year progresses.