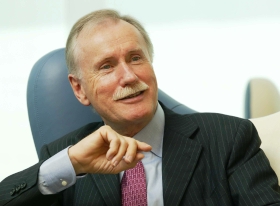 Bernd A. Diederichs sticks to his principles and crowns his 15 years as managing director of the NürnbergMesse Group with a record result for 2010: revenue of just under 205 million euros

and some ten million euros profit after taxes with an EBITDA (earnings before interest, taxes, depreciation and amortization) of over 41 million euros. ''This means we have achieved by far the best financial year in terms of revenue and profit in the 35-year history of the NürnbergMesse Group,'' says a delighted Diederichs, commenting on the almost five per cent return on revenue. Of special importance for him is that the international subsidiaries also contributed to the profit. ''And this to a disproportionately large extent,'' emphasizes Diederichs, in view of an international profit of over two million euros with a revenue of almost 12 million euros alone for the three subsidiaries in Brazil, North America and China.

Bernd A. Diederichs, Managing Director of the NürnbergMesse Group

When asked about the secret of success, Diederichs spontaneously mentions four key factors: ''The continuous internationalization of the concepts, the high level of motivation of the colleagues, a consistently entrepreneurial orientation and a team of managers who harmonize excellently and complement each other´s strengths.'' The results show he is right: Today´s growth of the exhibitions comes mainly from abroad and the exhibitions abroad also contribute to profit. The staff fluctuation in the company is less than two per cent. The profit after appropriate investment is reaching previously unknown heights, and the Nürnberg exhibition specialists are constantly envied for their corporate culture.

The outstanding result in 2010 is due mainly to the above-average development of sold display space and the additional services offered. The sold space of 967,000 m² in 2010 was some ten per cent above 2008, a more comparable year in terms of event cycles. This space was booked by a total of 29,581 exhibitors, corresponding to a rise of nineper cent. The share of international exhibitors at the Nürnberg exhibition venue remained steady at 38 per cent (2008: 37%), and was 49 per cent (previous events: 47%) for the international own and partner events of NürnbergMesse. Altogether 1.38 million visitors (2008: 1.26 million) attended the 159 exhibitions, congresses, public events and company events in the portfolio of the NürnbergMesse Group in 2010, which is also nine per cent growth.

The share of revenue generated by Exhibition Services is becoming increasingly important. The NürnbergMesse Group meanwhile offers its customers integrated services - from initial advice on exhibiting and press and marketing services to walk-on stand. Today, Exhibition Services produce almost a quarter of the total revenue of the NürnbergMesse Group, with 48.8 million euros in 2010 (+142 %).

Own and partner events in inland:

Only the CCN CongressCenter Nürnberg dropped slightly from 12.6 million euros to 11.0 million euros due to the major reconstruction work on the Mitte (central) area until September last year.

In view of the dynamic development of NürnbergMesse, also partly due to the stake acquired in the exhibition construction services provider Holtmann, the number of employees in the year ended increased appreciably to 442 (+34%), including 52 apprentices, trainees and students at the university of cooperative education (+37%). This means the training quota is an impressive 12 per cent.

As the odd years are still weaker in the NürnbergMesse Group, Diederichs assumes a revenue of over 170 million euros for 2011, following 132 million euros in the more comparable year 2009. ''We are about three per cent better that planned. Besides the somewhat better development of exhibitions and congresses, this is particularly attributed to the purchase of the it-sa exhibition, which is developing exceptionally positively and will certainly be a source of great pleasure for us in the future.''

At the end of the day, the international own and partner events of NürnbergMesse are growing in the first half of 2011 by one per cent each in terms of exhibitors, sold space and trade visitors, with the international growth (exhibitors +3%, space +5%, visitors +16%) distinctly more than compensating for the declining figures for German exhibitors (-2%), their space (-2%) and visitors (-6%).

Exhibitions like embedded world and the European Coatings SHOW excelled with two-figure growth rates, and even Vivaness and IWA & OutdoorClassics achieved single-figure growth. ''The Stone+tec and ALTENPFLEGE exhibitions had to accept partly appreciable drops and have slightly dampened our result for the first half year,'' says Diederichs, summing up another good overall first half year for NürnbergMesse. ''The natural stone exhibitions in Europe are undergoing radical changes - strong competing exhibitions are growing up worldwide, especially in China. But Stone+tec was still a good exhibition despite its contraction. We will therefore make good use of the coming two years and then get off to a powerful start again,'' he announced.

For the second half of 2011, the NürnbergMesse team expects growth for all its own and partner events; especially the POWTECH and TechnoPharm duo and it-sa, The IT Security Expo, are developing exceptionally favourably.