Pump it up!: PUMPENplatz cluster set for growth

Pump it up!:
PUMPENplatz cluster set for growth

"PUMPENplatz" is the competence center for pumps, pump systems and components at 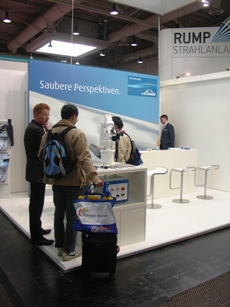 The venue this year is Hall 15, Stand G43 - where trade visitors will find a comprehensive cross-industry slice of products ranging from components to compete systems for transporting liquids and gases. Exhibitors include the major manufacturers Grundfos, Xylem Water Solutions, Magnetrol and ICH Sealing Solutions.

On Thursday, 10 April, the "Efficiency Arena" takes place at the "PUMPday" event in Hall 14. This forum features individual workshops in the morning and a lively discussion round in the afternoon.

The PUMPENplatz event is also part of the Technology Tours, which is dedicated to showing visitors the relevant highlights at HANNOVER MESSE. In keeping with this year's theme there will be a "Dutch Day" on Wednesday, 9 April, at the PUMPENplatz venue, where visitors can expect an abundance of delicious foods and beverages.