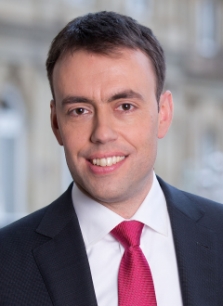 and Economy, takes over the patronage for AMB 2014. The international exhibition for metalworking takes place in Stuttgart from 16 to 20 September 2014.

The Minister has stated he is happy to take on the patronage. "AMB is an indispensable platform for Baden-Württemberg for the presentation of the productivity and innovative capability of the companies located here. It impressively shows the importance of the industry for economic growth and thus the wealth of our citizens and the entire state."

of Finance and Economy in Baden-Württemberg,

Image: Ministry of Finance and Economy of Baden-Württemberg

AMB is one of the top 5 trade fairs worldwide for machine and precision tools. In Europe, it is the leading industry trade fair every two years. At the last AMB in 2012 1,344 companies, of which almost one third were foreign companies, presented their products and services to over 88,000 visitors from home and abroad. In light of the to date very successful exhibitor registration, Gunnar Mey and Sengül Altuntas, the two project managers of the event, both agree: "AMB 2014 will build on the success of previous years and reinforce its importance as an international innovation showcase of the industry."

With an economic performance of approximately 389 billion Euro in 2013 the economic area of Baden-Württemberg is still a good third above the EU average and in terms of value is on par with Sweden, Belgium or Poland, according to the statistics "Baden-Württemberg - a location comparison" (http://www.statistik.baden-wuerttemberg.de/Veroeffentl/803613001.pdf ) from the state government of Baden-Württemberg. 5.1 percent of the gross domestic product is also invested here in research and development, a peak value compared to international standards.

According to the organisers of AMB 2014, the metalworking companies located here hold a large proportion of the economic power of the region, and "in our opinion, use the leading European trade fair for the industry every two years very intensively in order to present their large innovation and services portfolio to an international professional audience", highlight the project managers.

Approximately 1,300 exhibitors and over 90,000 trade fair visitors are expected to AMB 2014 from 16 to 20 September. They will come not only from all federal states but also from all over Europe and overseas to be "key to markets" in Stuttgart. They will present their innovative ideas and further developments on around 105,000 square metres of space, addressing themes ranging from machining technology and the precision tool industry, to chucking tools, CAD, CAM, CAE, software, grinding machines, the handling of workpieces and tools, as well as measurement technology. AMB 2014 will be supported by the conceptual supporters VDMA Precision Tools, VDMA Software and VDW, the German Machine Tool Builders' Association.