Even at this early stage, Luminale 2014 is set to present a high-grade programme of events. With registrations for over 100 lighting installations received by the deadline at beginning of 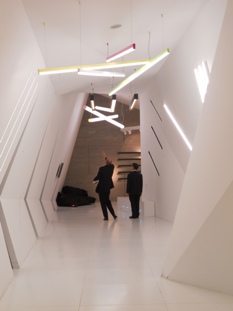 December, the Biennale of Lighting Culture from 30 March to 4 April 2014 will be on a par with its predecessors. The installations to be seen include spectacular projects, such as the interplay of light and shadow on the 'Nextower', a project conceived by the Sounds of Silence studio, which has the potential to become the landmark of this year's Luminale. Located near 'Börsenplatz' and 'Hauptwache', the installation will give visitors the opportunity to create their own galanty shows and project the shadows of their hands onto the building under expert supervision.

Besides the traditional Luminale venues, such as 'Börsenplatz', 'Hauptwache', 'Römer' and 'Palmengarten', the focus will also be on the Main Railway Station (Hauptbahnhof) as a cathedral of mobility, as well as the illumination of the River Main urban area, which celebrates its 10th anniversary in 2014. From being an area of shadow dividing Frankfurt, the river and its banks have developed into an artery of light for the city and the region. A new bridge illumination in the east of the city, at the foot of the new ECB Tower, will extend this urban area towards the neighbouring city of Offenbach - an example of how Luminale contributes to the sustainable development of Frankfurt's urban landscape. Further upstream, there will also be several Luminale installations in Offenbach. The Port District with the 'Hafen 2' off location, the Heyne factory and a variety of Art Spaces demonstrates the potential of the city as a creative location.

One of the main attractions of this year's Luminale will be Frankfurt's 'Osthafen'(East Port). The winner of the Mainova competition, Cologne-based architect and urban planner Prof Jochen Siegemund, will illuminate the electricity substation there with a three-dimensional light installation. Blue and red rays of light from energy-saving LEDs along the green corrugated sheet façade symbolise the flows of energy in the power grid. In the immediate vicinity of the arches of the newly restored Honsell Bridge, Mirek Macke of the 'Montez' art society will present lighting-art talents. Also involved for the first time is the Naxos factory, the industrial charm of which provides an ideal setting for experimental, young positions, installations and interventions with light. During Luminale, the Naxos building with the Willy Praml Theatre will be the main Luminale meeting place with a café and lecture room.

The Biennale of Lighting Culture is being held for the seventh time concurrently with Light + Building, the world's leading trade fair for lighting and building-services technology, from 30 March to 4 April 2014. Messe Frankfurt launched Luminale in 2002 with the aim of transporting the themes of the fair - lighting, design and architecture - into the city and drawing the attention of a broad audience to them. Numerous Light+Building exhibitors support designers and artists with their Luminale installations or show their own innovations in a practical setting.

Especially for trade visitors and journalists, World-Architects.com will once again offer guided tours to selected installations. Energy efficiency and sustainability, the paramount themes at Light + Building, are also very important for Luminale. Thus, the Energy Department of the City of Frankfurt will inform visitors about the subject of the Green City. During Luminale, there will be guided tours to exemplary buildings, including the 'Kap Europa' congress centre at Frankfurt Fair and Exhibition Centre. Artist Barbara Trautmann is planning a light-tube installation for the foyer of the new building.