Harmonious combination:
LED and OLED complement each other perfectly

ED lighting is sufficient to confirm that the future belongs to the LED. And rightly so because the advantages it offers are unequivocal: not only is it energy efficient and long-lived, it is also highly compatible with modern lighting-control systems. But that's not all: the LED is now also absolutely on a par with the 'light bulb' in terms of lighting quality and colour. Hence, it is hardly surprising that manufacturers and designers are working zealously on giving new form to the light of the LED.

Designers face a number of unusual challenges when designing new luminaires with LEDs. For example, almost every pre-LED living-room luminaire had one thing in common: a fitting for replacing the lamp. This is no longer necessary. Thus, the points of light produced by LEDs increase the degree of design freedom. Their small size and minimal heat production mean that the conventional shape with body, fitting and light head is superfluous. The LED permits new control methods and, thanks to its longevity of a decade or more, it can be permanently integrated into the luminaire - as a rule, it is no longer necessary to replace the illuminant.

The joy of experimentation is clearly evident in the work of many designers. At long last, they can employ severe geometric line 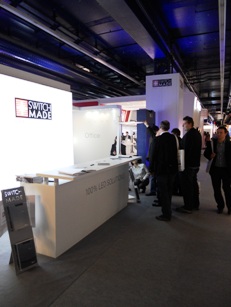 s and shapes; strips and points of light are integrated into extremely filigree pendent elements and flat bodies that would have been inconceivable only a short time ago. In many cases, the light itself rather than the luminaire is the focus of attention, i.e., rays of light are the dominant creative element: bright surfaces of light and extremely flat cases permit innovative lighting scenarios in which the LED light source remain in the background or completely invisible. However, a trend in one direction inevitably generates a counter movement: on the one hand, severe geometrical lines and a celebration of modern technology; on the other hand, materials symbolising a shift towards the physical, the traditional and the familiar. In this case, modern LED light is often combined with natural, raw or industrial materials, such as brass, ceramic, glass and even concrete and paper,

Exploring and developing the enormous range of technical and design options opened up by LED lighting, and then incorporating the results in an existing portfolio of products, is pioneering work that the lighting sector has embarked on with enthusiasm. And while the LED is busy carving out a place for itself in the lighting world, many manufacturers are already tackling the next challenge: the development of the organic light-emitting diode, OLED for short. In distinction to the LED, the OLED forms an illuminated surface. Thanks to its small size, the possibilities opened up by the OLED are also enormous and include, for example, illuminated textiles, objects or complete surfaces. This does not mean that the OLED is in competition with the LED. On the contrary,

it is a purposeful and equally energy-efficient addition. In the future, automatically controlled LEDs will provide for dynamic everyday lighting supplemented by indirect OLED lighting covering walls and ceilings. The illuminated surfaces of OLED luminaires are responsible for a futuristic touch; wall coverings and textiles can be made to appear in a gentle light and, when it gets dark outside, an OLED film on the window can create artificial daylight. The new light already offers a host of exciting and innovative opportunities and is in the midst of a development process, the end of which is not in sight. Hence, it will be interesting to see the innovative 'enlightenment' that LED and OLED will bring in the immediate and distant future.

LED luminaires in all shapes and colours will be on show at the coming Light+Building, the world's leading trade fair for lighting and building-services technology in Frankfurt am Main from 30 March to 4 April 2014. In view of the greatly increased demand for LED solutions on both the exhibitor and visitor sides, Hall 6.2 will be opened for the first time to provide additional exhibition space for the LED lighting and technical lighting and lamps product groups. The spectrum of products in the lighting section in Halls 1-6 and 10 at Light+Building range from technical, design-oriented luminaires, via decorative lighting and outdoor and street lighting, to lamps. Manufacturers in the fields of electrical engineering and house and building automation make their presentations at Light+Building in Halls 8, 9 and 11.