The worldwide leading platform for grinding technology will clearly overtake the benchmarks of the previous record event in 2012. A good 500 exhibitors (+ 11 %) are expected in Augsburg, the amount of space occupied will grow by about 15 %, and even the internationality factor is increasing: 40 % (in 2012: 35 %) of the participating companies are based outside Germany. The increasing interest of international companies is a significant factor contributing to the growth of the GrindTec. But the larger exhibition stands required by the leading machinery manufacturers are an equally important factor: Especially at the GrindTec they want to present a broader spectrum of exhibits than in previous years.

GrindTec international:
China, Korea and India on their way to Europe

The proportion of foreign companies was never as high as it is this time: At the GrindTec 2014 the quota amounts to 40 %. 26 countries will be represented at the GrindTec 2014, and there are some remarkable developments to be seen. For example Switzerland, traditionally the most important foreign country: Nearly a third of the foreign participants come from Switzerland, and they have increased the amount of space occupied by phenomenal 76 % over 2012. China, the No. 3 of the foreign participants after Italy, is sending considerably more companies, and the space they are occupying is increasing by nearly 60 %. The increase in the previously relatively small participations appears even more dramatic, e.g. the USA with 7 exhibitors (2 at the previous event), India with 4 (1) and Korea with 5 (2).

A perfect match:
The GrindTec exhibitors and visitors

They speak the same language: The GrindTec exhibitors and visitors are only interested in one thing - grinding technology. That is the crucial advantage of the specialised trade fair GrindTec. From day one the participating companies have been praising the quality of the visitors. The most prominent characteristic: their competence a 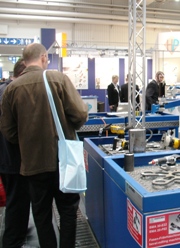 s decision-makers. 68 % of them are "sole decision-makers" or are "involved in decision-making", 21 % are "involved in an advisory capacity". The range of exhibits at the GrindTec 2012 also received the best assessment ever: 90 % of visitors gave it the marks "very good" and "good". And for more and more visitors the GrindTec is sufficient as their information platform for the subject of "grinding technology": 48 % of the visitors no longer visit any other trade fair from this sector. So who's surprised: for 80 % of the visitors the GrindTec is worldwide the leading forum for grinding technology.

GrindTec 2014:
Solutions for the sector's challenges

Variant diversity in production results in machinery manufacturers being faced with smaller orders. This makes it a real challenge to produce quality products economically. For years the concept of complete machining of individual parts in one sole chucking has been under discussion, but this means more than "only" being able to apply all the numerous manufacturing processes in one machine. In order to manufacture a part with the highest precision, with the lowest tolerances and with the lowest possible surface roughness, it is usually necessary for the chain of procedures to finish with grinding technology. So we can look forward to seeing new grinding centres at the GrindTec 2014, which fulfil these high demands.

But the machining of hardened materials and super-hard cutting materials is also carried out through grinding. The most difficult task in grinding technology remains 5-axle grinding of complex geometrical parts - tool grinding. In this technology we will also see numerous innovations presented at the GrindTec 2014, which support grinding and tool-making technology. Exhibits from measuring and chucking technology, from software applications and the corresponding periphery round off the programme of products.

The ranges of exhibits and information services at the GrindTec 2014