After achieving a record result, the 36th International Dental Show (IDS) that was characterised by an excellent atmosphere closed its doors in Cologne after five days. Around 138,500 trade visitors from 151 countries attended the 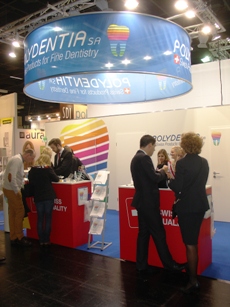 world's leading trade fair of the dental industry, which corresponded to an increase of almost eleven percent compared to the previous event.

IDS also achieved new records in terms of the number of exhibitors and the exhibition space sold. 2,201 companies (+6.9%) from 56 countries presented a wealth of innovations, product developments and services on exhibition space covering 157,000 square meters (+6.2%). With an over 70% share of foreign exhibitors (2013: 68%) and a 17 percent increase in the number of trade visitors from abroad the level of internationality of the event was once again significantly increased. At the same time, the number of trade visitors from Germany also increased markedly in comparison to 2013 (+4.3%). "We succeeded in making the International Dental Show in Cologne even more attractive, on both a national and international basis. It is thus the most successful IDS of all time," summed up Dr. Martin Rickert, Chairman of the Association of German Dental Manufacturers (VDDI).

"The quality of the business contacts between the industry and the trade as well as between the industry, dentists and dental technicians was extremely high. The number of orders placed at IDS rose once again and we are reckoning with sustainable impulses for the post-fair follow-up business," added Katharina C. Hamma, Chief Operating Officer of Koelnmesse GmbH: "In addition to the growth in the number of German trade visitors, the high international response once again underlines the character of IDS as the world's leading trade fair of the dental industry. The International Dental Show particularly recorded strong growth in the number of visitors from the Near and Middle East, the United States and Canada, Brazil as well as from China, Japan and Korea. The business in the South East European market, especially Italy and Spain, has also increased noticeably."

The full report can be found here: https://www.messekompakt.com/spangest-ids-of-all-time-in-cologne

Impressions from the "IDS 2015" can be found here: https://www.messekompakt.com/impressions-from-ids-2015