From September 25 to 29, 2017, the entire sector dealing with joining, cutting and surfacing technologies will make a one-off guest appearance at Messe Düsseldorf. SCHWEISSEN & SC 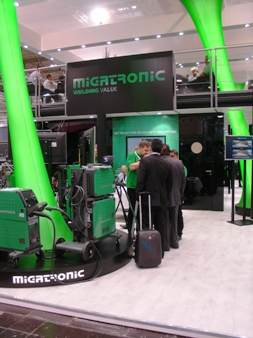 HNEIDEN will once more be characterised by high internationality. The around 1,000 exhibitors will travel to the world's premier fair from 40 nations. Six countries will present their products on official joint booths. The sectoral event will be rounded off by a top-class supporting programme with congresses and competitions.

At SCHWEISSEN & SCHNEIDEN 2017, a total of six official joint participations will show their country-specific innovations. China (Hall 11 and Hall 15) and the USA (Hall 10 and Hall 11) will both be represented with two booths each. French exhibitors will present themselves jointly in Hall 9. Further country pavilions will originate from Korea (Hall 12), Taiwan (Hall 14) and Japan (Hall 14).

At the same time, SCHWEISSEN & SCHNEIDEN will also be the leading meeting place for the exchange of specialist ideas and the transfer of know-how. On the initiative of the German Welding Society (DVS), the DVS CONGRESS with the Annual Welding Conference (GST) and the DVS Student Congress will this year take place im Congress Center Düsseldorf East at Messe Düsseldorf from September 26 to 29. The DVS CONGRESS will stand for top-class lectures with first-hand information. The combination with SCHWEISSEN & SCHNEIDEN will offer an excellent environment for this purpose. The DVS CONGRESS will present an extensive programme of lectures relating to the entire performance spectrum of current joining technology and its trendsetting developments.

Who's Best at Welding?

For the best young welders from home and abroad, three interconnected contests will take place in Hall 14

during SCHWEISSEN & SCHNEIDEN 2017. The prelude will be the 12th National DVS "Young Welders" Competition in which Germany's most talented young welders will be sought in the four disciplines: Gas Welding, Manual Metal Arc Welding, Metal Active Gas Welding and Tungsten Inert Gas Welding.

The WELDCUP with European participants as well as the International Competition with young welders from all over the world will take place thereafter. Thus, it will become exciting when the most talented young welders from all over Germany as well as from abroad compete against each other before the eyes of the knowledgeable public. All the competition tasks will be oriented to the stipulations of the welder qualification test which complies with DIN EN ISO 9606?1 and is recognised on the European and international levels.

DVS's robot welding competition called the "ROBOT WELDING CONTEST" in Hall 13 will primarily relate to excellent welding knowledge and skilled programming. Until July 31, robot operators all over the world will still have the possibility of registering for the second DVS robot welding competition. As one of the event highlights at the world's premier fair, SCHWEISSEN & SCHNEIDEN, this international competition will take place at Messe Düsseldorf from September 25 to 28, 2017.

At seven different stations with combinations of robots and welding power sources, the participants will introduce their abilities in programming, teaching and welding. As a knowledgeable jury, the Halle Welding Training and Research Institute (SLV Halle GmbH) will check the welded components directly in situ.