Growth in business activity in autumn 2013

Optimism is growing again in the German aluminium industry. Production in many 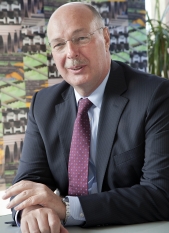 sectors grew in the first half of 2013 and the positive trend continued in the third quarter.

Production of raw aluminium and aluminium semis increased, although there were slight falls in the quantities produced by foundries and processors.

The sector is expecting stable volumes in the fourth quarter.

Semis production continues on its path of growth

Production of aluminium semis in the first three quarters of 2013 totalled 1.901 million tonnes. This represented a rise of 2.1 per cent year-on-year. The companies in this sector produce rolled products, extrusions, wire and forgings. Quantitatively, semis production is the German aluminium industry's most important sector. The improved economic situation in many user industries led to a pick-up in demand for aluminium semis. Semis producers supply all the important industrial sectors. The largest users are the automotive and building sectors together with the markets for packaging, and mechanical and electrical engineering.

Fall in production of aluminium castings

The production of aluminium castings during the period January to September 2013 totalled 603,701 tonnes. This represented a fall of 3.0 per cent. By contrast, production in September was 68,762 tonnes and thus 7.6 per cent up on the corresponding month a year earlier. The companies in this sector produce sand, permanent-mould and die castings. The main use of cast products is in the construction of road vehicles. Mechanical engineering is also an important market.

Some 256.698 tonnes of aluminium were subjected to further processing in Germany during the period January to September 2013. The production volume was thus 2.0 per cent lower year-on-year. Further processing is divided into three sectors: foil and thin strip, tube and aerosol and other cans, and metal powder. Production of metal powder fell 9.9 per cent, but there was a marked increase of 5.9 per cent in the production of tube and aerosol and other cans. Production of foil and thin strip declined 2.5 per cent.

Germany has not been impervious to the weak economic situation in Europe in 2013. Falls in demand were apparent, especially for industrial applications. However, according to Andreas Postler, head of Economics and Statistics at GDA, the signs for an economic turnaround are good. "Although the hard economic indicators are still negative at the moment, the sentiment indicators are positive. This is especially the case with expectations, which have been showing an upward trend for some time. On top of this, the forecasts for 2014 for the aluminium industry's most important user markets are all positive. Research institutes, banks and trade associations are all in agreement on this."