back
EUROGUSS 2012:
A complete success!

(Closing Report)
Exhibitors, visitors and the associations are agreed: EUROGUSS2012 was a complete success! The mood in the exhibition halls was almost euphoric. Exactly 8,415 trade visitors - 18per cent more 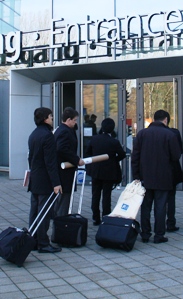 than at the previous event - came to EUROGUSS in Nürnberg from 17-19 January 2012. The Trade Fair for Die Casting also excelled with a new record for net space, which was up 15per cent on 2010. The presentations at the International Die Casting Congressorganized by the Verband Deutscher Druckgießereien (VDD - Association of German Die Casting Foundries) were extremely well attended. The new special show "Research for Knowledge" attracted lively interest among the visitors. The delighted winners of the International Aluminium Die Casting and Zinc Die Casting Competitions were presented with their awards at the opening ceremony.

"There was no sign of a crisis during the exhibition. It was a really good event and our members took many orders. It looks as if we could beat the record sales and the employment growth in our sector again in 2012," sums up Gerhard Eder, VDD Chairman. Dr. Timo Würz, General Secretary of CEMAFON, The European Foundry Equipment Suppliers Association, says:
"EUROGUSS is far more than just an exhibition for cultivating contacts. Specific projects were discussed with the industry on the stands. 2011 was an amazingly good year for our sector and the prospects for 2012 are also optimistic at lower growth rates." Insiders know that the success of the exhibition and the good mood in the sector is mainly attributed to the present boom in the automotive industry. The die casting foundries profit from this, because three-quarters of their orders come from the automotive sector.

42 per cent of exhibitors from abroad

The exhibitors at EUROGUSS were die casting foundries and their suppliers, equipment suppliers and service providers. 383 exhibitors, including 42per cent international firms, presented their products on their stands at the exhibition this year, including machines, plants, furnaces, moulds, alloys, measuring equipment, quality control and graphic software. The exhibitors travelled from altogether 28 countries, after Germany (223) mainly from Italy (65), Switzerland (11), Austria (11), Sweden (10) and France (9).

Survey of exhibitors: 93 per cent made new contacts

An independent market and opinion research institute conducted a representative survey of exhibitors and visitors during the exhibition. 93 per cent of the exhibitors made new contacts at EUROGUSS, 90 per cent expect follow-up business from the talks held at the exhibition and 98 per cent were satisfied with the overall success of EUROGUSS. 89 per cent are already sure they want to exhibit again in 2014.

Survey of visitors: two-thirds are decision-makers

Every fourth visitor travelled from abroad, largely from European countries. The share of visitors working in automotive engineering or for automotive component suppliers rose appreciably to 45 per cent (2010: 38 per cent). Other visitors came from die casting foundries (13 per cent), machinery and plant manufacturers (11 per cent), mould makers (6 per cent), the electronics industry (4 per cent) and other branches. The exhibitors praised the high quality of the professional audience. 65per cent of the visitors have a decisive influence on procurement decisions in their companies.

Aluminium and Zinc Die Casting Competitions: "And the winner is..."

The winners of the International Aluminium and Zinc Die Casting Competitions received their awards at the official opening ceremony of EUROGUSS. The organizers of the two awards particularly paid tribute to the high quality of the die castings entered for the competitions.