Close Contact with People: Service Robots in Medicine and Nursing

Close Contact with People:
Service Robots in Medicine and Nursing

Service robotics in medicine and nursing has pioneering significance. Regardless of whether in surgery, nursing and rehabilitation or in logistics and organization of hospitals, serv 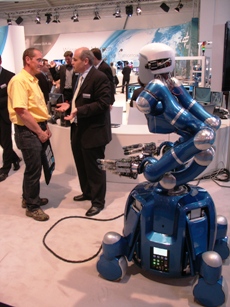 ice robots are being used successfully in an increasing number of areas. With sales of USD 1.5 billion in 2012, medical robots have a share of 44 percent of the total volume of professional service robotics. AUTOMATICA is providing professional service robotics with its own platform and presenting the latest developments and concrete applications from June 3 to 6, 2014.

Thanks to movement detection, navigation, learning ability and artificial intelligence, man and machine are creating a perfect team increasingly often. A classic example of this is the surgery robot \\"da Vinci\\" with its triumphant progress around the globe. Contrary to conventional minimally invasive surgery, which has already been used for gall bladder and appendix operations for quite some time, much more complex operations can be carried out safely using the da Vinci robots. "In urology, we can remove complex kidney tumors organ-saving with less pain and discharge patients earlier," according to Dr. Ahmed Magheli, Chief Urology Physician at Charité Berlin. "This above all concerns radical prostate operations, which require an especially delicate technique, because continence and potency are endangered." While surgeons previously had to perform up to 200 laparoscopic interventions to achieve constantly good results, they can complete the operations with excellent results a lot faster today thanks to da Vinci. "Da Vinci has revolutionized minimally invasive prostate surgery and makes it accessible to the general public."

The robots continually remain under control of the doctor during surgery, Prof. Gerd Hirzinger confirmed, former Director of the Institute for Robotics and Mechatronics of the German Centre for Air and Space Travel (DLR) in Oberpfaffenhofen. "However, a robot arm can insert a biopsy needle right on target in a brain tumor sized only a few millimeters without shaking and possibly more precisely than a surgeon's hand."

KUKA robots are active very close to humans. They help to make diagnoses as well as plan and administer treatment. Robots position patients, conduct concept studies about bone surgery and contribute with robot-supported rehabilitation after strokes to improve the quality of life for people in need of help. "With key technologies in the area of safety, simple operating concepts and autonomous navigation, robots are being transformed into clever assistants for people," Michael Otto, Head of Medical Robotics at KUKA Laboratories GmbH, summed up the development.

Service robotics in the

Service robots provide valuable services in the logistics of modern hospitals such as Niguarda Ca' Granda Hospital in Milan. On approx. 340,000 square meters, 32 driverless transport vehicles circulate - completely autonomously - to bring meals to the wards, pick up laundry, dispose of waste, get drugs from pharmaceutical stock management, procure medical accessories and perform sterilizations. The more than 4,100 specialists can consequently use their time for activities that create added value and take care of patients better.

"Flexible, configurable and autonomous service robotics is essential for this high degree of automation," Nicola Tomatis explained, CEO of BlueBotics SA and inventor of ANT (Autonomous Navigation Technology). "Independent functioning in a human environment requires intelligent navigating, which does not require additional infrastructure and consequently can be used economically on a wide range."

Service robots are recording economic success in rehabilitation. "Insights into the neuroplasticity of the central nervous system and function-oriented learning demonstrate that patients with neurological movement disorders can relearn through intensive training," Dr. Gery Colombo commented, Co-Founder and CEO of Hocoma, internationally leading in automated therapy equipment. The new module FreeD has taken the lead. It supplements the Lokomats with additional degrees of freedom and additionally trains motoric aspects for the rehabilitation phase later. "The new Cochrane Review, an evidence-based meta analysis, proves that stroke patients who receive robot-supported walking training combined with physiotherapy are much more likely to learn to walk independently again than those who train conventionally."

"The future challenges for service robots are in their ability to communicate and their close interaction with people," Dr. Roko Tschakarow observed, Division Manager for Mobile Gripping Systems at SCHUNK. Service robots are especially interesting in areas where they work more precisely than people. With its Italian technology breeding grounds Loccioni, for example, SCHUNK has produced a robot to operate in a hospital pharmacy whose grippers mix toxic substances for tumor therapy and have improved quality demonstrably thanks to this automation.