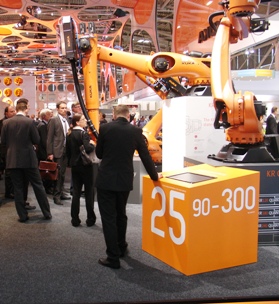 The development of sales in service robotics demonstrates that the technology is penetrating an increasing number of application areas in the market. Professional service robots are equipped with new skills: they can detect and interpret their surroundings, are capable of learning and can even be instructed by laypersons for new tasks. They handle complex tasks flexibly and independently - in part via voice or gesture control - alongside of people and perform demanding activities. With a growing tendency to standardized hardware and software standards, various system components can increasingly be linked according to modular concepts.

The European Union (EU) has declared robotics as a focal point in the research and innovation program "Horizon 2020". Within the context of a public-private partnership, the EU is going to start the globally spangest initiative in civil robotics in collaboration with industry. Neelie Kroes, EU Commissioner for Digital Agenda, emphasized: "We want to expand the industrial lead of the European Union in service robots and create new jobs through this success. The market for robots that can interact with people is going to expand, so I welcome the plan of AUT 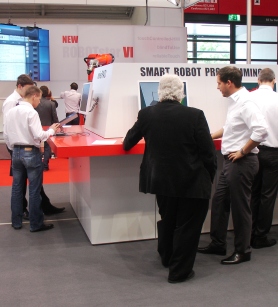 OMATICA to give saleable service robotics its own forum."

Specific measures for promoting service robotics have already been taken on EU levels. Up to 20 small- and medium-sized companies are receiving financial subsidies in the amount of 2,500 euros plus additional, partial travel expense reimbursement for participating in the new exhibition area of AUTOMATICA 2014.

There are approx. 100,000 professional service robots in use today. Medical robots are the leading sector with sales growth of 20 percent in 2012 compared to 2011. Service robots are above all often used for computer-assisted and image-guided surgery, where the average price of a robot is around 1.5 million US dollars.

Robots for supporting senior citizens and persons with disabilities are in trend. They provide therapy and training, improve physical and cognitive functions or serve as intelligent prosthetics.

Driverless transport systems for intralogistics are becoming popular, for which the highest growth rates are predicted together wit

h medical robots. Navigation technologies are decisive there, thanks to which mobile robots can navigate independently in an unstructured environment, detect, interpret and classify it as well as track objects.

Especially milking robots are finding a lot of use in the agricultural sector. In addition, field robots account for 33 percent of professional service robotics. Although robots can handle many tasks in agriculture and forestry such as harvesting, spraying, planting and cutting, the requirements are very complex, so that that a lot of development work is needed to really master all applications combined in agricultural engineering.

Outlook for the Future

"Among others, strong growth sectors are mobile transport vehicles for various areas such as hospitals and mail-order business as well as robots in agriculture and medical robots," according to Martin Hägele from Fraunhofer IPA. "In addition, robots are getting a stronger role in inspection and maintenance areas, security and rescue tasks."

Because innovations are created at the interfaces of disciplines, close collaboration between research and industry is a prerequisite for future success. This will be determined by three pivotal topics, according to Roko Tschakarow, Head of the Business Mobile Gripper Systems Division at Schunk: "Safety for people and material, the general legal conditions and the creation of higher performance plant engineering and system integrators."