When the 4th Asia Outdoor had closed its doors in the afternoon of Aug. 2 it had not only achieved a stunning success by boosting its attendance to more than 14,000 trade visitors. It had also opened up a new chapter in its own development. Following a first

analysis of the trade fairs results the organizers among Knut Jaeger are very happy to have reached all of their ambitious objectives: More visitors, new ASIA OUTDOOR ACHIEVES STUNNING SUCCESS visitors from new regions, and a noticeable stimulation of the OEM business initiated on the fairground.

Having raised its number of exhibiting brands from 245 to 288, Asia Outdoor already expected a clear increase in attendance. The number of 14,344 trade visitors (by the way determined following the strict counting standards of FKM), however, exceeded even the highest expectations. Knut Jaeger, the co-founder of the trade fair and Asia expert since 1978, illustrated the following apparently happy: ''Our focus on creating a lively networking platform for the outdoor community worked out completely even.''

''Referring to our registration data and a brief analysis of the surveys we carried out throughout the show, we can say that a large number of trade visitors from the North have found their way to Nanjing. Beyond that, many smaller dealers have attended the show for the first time,'' Richard Li, Assistant Director of the Nanjing fair pointed out. ''After five years of booming outdoor in China, finally it arrived as a consumer trend also in the 2nd and 3rd category cities - all of them by the way megacities with up to 7 mill. inhabitants'' he added smiling very satisfied.

OEM now perspicuously on the uprise 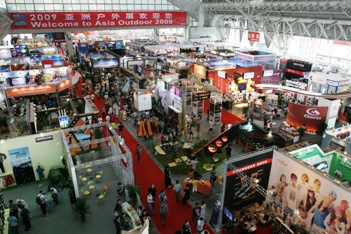 Most of the 35 new outdoor brands were OEM producers looking for new markets ASIA OUTDOOR ACHIEVES STUNNING SUCCESS replacing their broken apart export business. Their newcomer brands were of great interest, especially to those dealers who would focus on lower priced segments. Asked about how the trade fair runned for them, they showed themselves extremely happy and satisfied. Together with the top ranged European and overseas brands, Asia Outdoor now offers a very suitable choice for the emerging markets in its surroundings. Even international buyers showed themselves very confident about their socializing at Asia Outdoor.

As more than 86% of the attending brands have signalized that they will definitely reattend in 2010 and some already have booked spanger booth space, the Nanjing team and its European Overseas Office in Germany are very confident to succeed in raising the figures again in 2010. ''But we´re not only focusing on quantities. We have clearly identified the key points for a successfully continued development of Asia Outdoor in the future'', says Oliver Schmitt, its director who attended the show: ''Building up a platform for the outdoor community, creating opportunities for brand experience, matchmaking European brands with Asian distributors and investing in the trading up of new markets; these are the targets for the upcoming show!''