Inspires from Beginning to End

"With the 52nd edition of ART COLOGNE, we have shown that we are the most important art fair in Germany", summarises Daniel Hug, Director of ART COLOGNE. And in fact, ART 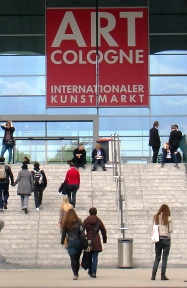 COLOGNE has once again underlined its top position as the leading German art fair. The trade fair convinces with an art offering at the highest level of sophistication, both in terms of quality and price, and has inspired the around 55,000 visitors in every respect. "This year we have attached even more importance to the quality of the offering and to a balanced mixture of German and international, as well as of established and young galleries. In contrast with previous years, we have now been fortunate to welcome an even larger number of international collectors in Cologne. This is of course very good news", Hug continues. The high degree of internationality is also reflected in the 210 galleries from 33 countries selected by the advisory council, which were especially praised by the educated public.

"A wonderful energy prevailed at the opening, and we are highly satisfied with the sales", explained Veronique Ansorge from the David Zwirner gallery (New York, London, Hong Kong). "The trade fair looks very good, the plaza makes it very spacious", according to Ansorge. "We feel good here, which is why we're here for the second time", said Jona Lueddeckens from the Gagosian Gallery(New York, London, Paris, Rome, Beverly Hills, Hong Kong), which presented a large sculpture exhibition, and, among others, found a buyer for Urs Fischer's sculpture "Marsupiale". The Hauser & Wirth gallery (Zurich, London, New York, Los Angeles) also had good sales. "ART COLOGNE is a tasteful trade fair that is fun for everyone", according to gallery director Florian Berktold. The Galerie Sprüth Magers (Berlin, London, Los Angeles) has entered into discussions with institutions and museums involving the large fresh-from-the-studio painting of Thomas Scheibitz. "The opening was very international", shared Andreas Schleicher-Lang, gallery director in Berlin.

"Cologne is the place to be", finds the New York gallery owner Carolina Nitsch, who sold works by Gerhard 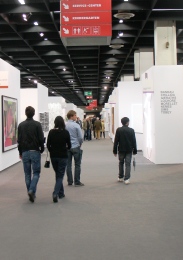 Richter and Bruce Nauman, "the opening was fantastic, we had collectors from New York and from Belgium at the stand and had some very serious discussions". Especially German collectors made purchases at the stand of the Pearl Lam gallery (Hong Kong, Shanghai, Singapore). For the Kamel Mennour gallery (Paris, London), its first appearance at ART COLOGNE was a good opportunity to establish contacts with new collectors, as Antoine de la Beraudière reported. The impression of the trade fair is very good, and sales were also satisfactory. The Lisson Gallery (London) sold a work by Lee Ufan. "We were able to establish good contacts here and are highly satisfied", shared Julia Baumhoff Zaouk from the White Cube gallery (London, Hong Kong), which was very successful with works from Georg Baselitz, Antony Gormley, Tracey Emin and Christian Marclay. There was praise from all sides for the generous layout planning around the spacious plaza.

"The Galerie Daniel Buchholz (Cologne, Berlin, New York), which also received enquiries from collectors and curators for long term projects was in a positive mood. "Everything looks great, we got a lot of positive feedback from the collectors", reported Dorothee Sorge from the Galerie Gisela Capitain (Cologne), which was able to welcome museum people from the Netherlands, France and Asia at their stand. At the Berlin-based Galerie Kraupa-Tuskany Zeidler, works from all of the artists were in demand. "We made a lot of sales to good people", according to Amadeo Tuskany-Zeidler. The mixed media sculptures of Anna Uddenberg will go to a private collection. "ART COLOGNE is better than it has been in years", reported Erika Schlessinger-Költzsch from the Galerie Haas of Berlin, which sold works by A.R. Penck, Martha Jungwirth and Jonathan Watridge to collectors.

Heinz Holtmann (Cologne) was pleased at the great interest in the abstract paintings of Alicia Viebrock, of which he sold several. "The crush on the opening day was so great that we, despite deploying additional staff, were unable to look after the people at our stand like we are used to", reported 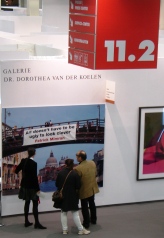 Klaus Benden (Cologne). "ART COLOGNE is wonderfully positioned and very well attended. As far as I'm concerned, the trade fair could go on for another week yet", the specialist for American Pop Art, who sold a canvas from Tom Wesselmann for a six-figure amount, claimed enthusiastically Also considerable was the enthusiasm at the Galerie Utermann (Dortmund). "Everyone came with a good mood and a readiness to buy; we had important collectors at the stand", said Lukas Minssen.

At the Galerie Thomas (Munich), for example, the sponsored cubicle with reliefs from Martin Spengler was already sold out on the evening of the opening. The Galerie Valentien (Stuttgart) was successful with graphic works from Max Ernst in the price range up to 4,000 Euro. "We sensed a great deal of enthusiasm, because even collectors with a smaller budget found something with us", according to the Stuttgart gallery owner. A museum was interested in the "Largo" painting of the German-American artist Hilla von Rebay. Also extraordinarily content was the Galerie Schlichtenmaier (Stuttgart), which was already able to sell numerous works at the opening, including a sculpture from Winfried Gaul, which was purchased by an American collector. "The trade fair is eminently well done and of exceptional quality", was the judgment of Johann Döbele of the Galerie Döbele (Mannheim, Dresden), which sold works of the photographer Robert Häusser to new customers, also from abroad.