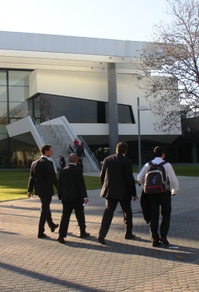 The organizers are the Verband Deutscher Druckgießereien (VDD - Association of German Die Casting Foundries) and the Bundesverband der Deutschen Gießerei-Industrie (BDG - Federation of the German Die Casting Industry). EUROGUSS, Europe's leading trade fair for die casting, takes place at the same time with some 450 exhibitors and 8,000 trade visitors. The winners in the Aluminium Die Casting and Zinc Die Casting Competitions will also be announced at the exhibition.

"The participants at this year's International Die Casting Congress have a good opportunity to discuss current developments in the sector with colleagues and experts and also see the new products and make new contacts at EUROGUSS," says Gerd Röders, Chairman of the Verband Deutscher Druckgießereien VDD. The international audience of die casting professionals can look forward to a top-class programme of presentations at the International German Die Casting Congress, which takes place at the heart of exhibition activity on stand 404 in hall 7: There are presentations on "Process technology, processing and casting applications" on 14 January, the focus on 15 January is on "Tools and machinery" and the main topic on 16 January will be "Casting materials and smelting".

All presentations are simultaneously translated into English. Attendance at the International German Die Casting Congress is included in the admission price for EUROGUSS. The complete programme will be available on the internet in calendar week 47 at: www.euroguss.de/die-casting-congress

Awards will be presented to high-quality and particularly outstanding aluminium and zinc die castings in separate competitions. The aim of both the Gesamtverband der Aluminiumindustrie (GDA- Federation of the Aluminium Industry) and the Zinc Initiative, the organizers of the two competitions, is to demonstrate the variety of applications and the performance of the materials. The winners of the competitions will be announced and the awards presented at the opening ceremony. The winning products in the International Aluminium Die Casting Competition will also be on display on the BDG/VDD stand - stand 7-402 in hall 7. More information about the Zinc Die Casting Competition is obtainable from the Zinc Initiative on stand 7-500 in hall 7.