Based on the fact that just a few months after the last Control closed more than 90% of the manufacturers and distributors decided in favour of participating again, the trend towards exhibition offerings and a supplementary programme with even more power and quality is expected to continue up through the event's promotion dates from the 6th to the 9th of May, 2014!

Longstanding Control project manager Gitta Schlaak is convinced that this will indeed be the case: "We're receiving bookings from established exhibitors as well as new manufacturers and distributors at an incredible rate. In this respect it's quite conspicuous that the new exhibitors come primarily from Asia, namely from China and Japan, followed by the USA. Although we've been recording increasing numbers from China and the USA for years, the number of Japanese participants had stagnated for quite some time - a situation which now appears to be changing. Beyond this, we're experiencing significant growth in the number of manufacturers and distributors from the image processing / vision systems sector - with regard to both actual bookings and concrete interest in participation.

As a result, the range of product and service offerings for image processing and vision systems will be 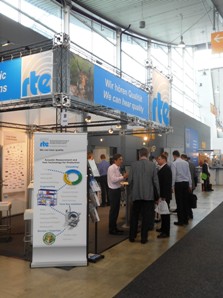 further expanded and rounded out at Control, especially in light of the fact that most of the nationally and internationally active market players have always represented the core of the competence/know-how segment for contactless measuring technology. Without a doubt, this globally esteemed core also includes the special show on "Contactless Measuring Technology", which has been organised in close and highly successful cooperation with the Fraunhofer Vision Alliance right from the start. The special show will celebrate its tenth anniversary at the 28th Control and can justifiably claim that, to a considerable extent, it has helped to shape the high-tech world of "contactless measuring technology" and move it into actual practice during the last decade.

The event forum entitled "Understanding and Experiencing Technology", which will also be held once again in 2014 by the Fraunhofer Institute for Production Technology and Automation IPA as a longstanding Control collaboration partner, will be dedicated this time to the issue of "Quality Assurance for Lightweight Engineering - Measuring and Testing Throughout the Process Sequence", placing strong emphasis on practical application as well. And thus Control's exhibitors and collaboration partners will present offerings to their declared target groups which span a range from material testing right on up to the documentation of good parts, assemblies and functionally tested complete units for shipment to the customer.